During their retreat on Feb. 3, council members and key city staff members debate language articulating their vision for Harrisonburg 20 years in the future.

By Randi B. Hagi and Ryan Alessi

After first crafting their vision for what they want Harrisonburg to be in 20 years, city council members and top city leaders emerged from their three-day retreat on Sunday with a clearer idea of their priorities — including building the new high school and developing a comprehensive housing plan.

Overall, the council members identified 22 priorities during their retreat at Hotel Madison that they hope to act on in the next three years. In taking those specific steps, the five council members said they hope to advance the city in key areas, such as economic development, education, inclusiveness, reliable city services, planning, sustainable finances, as well as affordable and available housing. City Manager Eric Campbell, City Attorney Chris Brown, and other key city staff members were also included in the discussion.

The new high school is expected to be a major focus of the next council meeting, Feb. 12, as the Harrisonburg City Public School board will make the case for moving forward immediately with designing the new school that’s expected to cost as much as $85.5 million.

During Sunday’s meeting, the five council members repeatedly underscored how important the school system is to ensuring what they see as a vibrant Harrisonburg.

Campbell opened the short discussion of building the new high school. The group barely deliberated before agreeing that funding the initial design and engineering services, securing bond funding for construction, and increasing city contributions to the project should be one of the council’s key priorities to support education.

While they acknowledged that the school board makes the decisions about the specific spending for education, both Jones and Mayor Deanna Reed emphasized the importance of maintaining and updating existing school buildings. They pointed to Thomas Harrison Middle School and the Lucy Simms Continuing Education Center as being in particular need upgrades.

Council member Richard Baugh said the council has a record in recent years of granting the school board’s requests for building maintenance and improvement funds. The discussion grew slightly heated as Baugh said some community members aren’t aware of the extent to which council has granting those funding requests. Campbell jokingly played the role of referee and, noting it was Super Bowl Sunday, tossed a napkin — or “flag” — on the table to curtail that line of discussion and move on.

By the end of the weekend retreat, city leaders not only found agreement on the key first steps the council wants to take, but also constructed their collective vision of what Harrisonburg can be in 20 years. That includes establishing the city as the “capital of the Shenandoah Valley,” according to the draft document articulating that vision for 2039. A final version of that document will be refined by March 26.

“We provide a quality urban living option for everyone who wants to reside here,” according to language from the draft the group discussed Sunday. “Our diverse population thrives in a welcoming city where all are valued as friends and neighbors. Our inclusiveness is our strength and reflects the true spirit of our city.”

The ideas came out of the discussions facilitated by local government consultant A. Tyler St.Clair, who said that while other processes — such as the city’s comprehensive plan — require public input, this process is was just for the council to get on the same page.

“It’s important for a council to have a vision because they’re a leadership group,” she said.

Baugh, the longest serving member of the council, said the weekend retreat was by far the most extensive discussion of overarching and long-term priorities in which he’d participated.

“This is valuable,” he said. “Someone from the outside or a member of the general public might assume these conversations happen all the time, and they really don’t.”

For one thing, Virginia Open Meetings laws require public officials to give the people notice about any discussions about policies and issues, which prevents city council members from talking privately to each other about city business so it can be in front of citizens and the media.

And, as Baugh said, regular council meetings are packed with specific agenda items — public hearings, budget discussions, debates over ordinances and appointments to boards and commissions. That offers few opportunities to have broader, big-picture discussions like the ones about Harrisonburg’s direction that developed over the retreat’s more than 21 hours that stretched from Friday evening to Sunday afternoon.

“You’re virtually never going to have someone say at a general council meeting, ‘Let’s have a general discussion for multiple hours about these big-picture planning/goal/vision type issues,” he said. “It’s just not going to happen.” 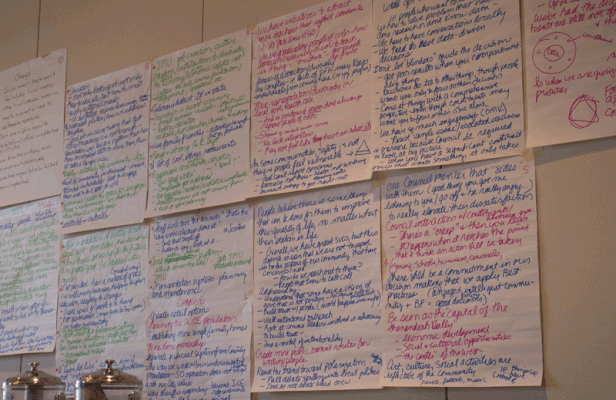 Large sheets of notes from city leaders’ retreat Feb. 1-3 cover over the walls of the Allegheny Room in Hotel Madison’s conference center.

Making homelessness ‘largely a thing of the past’

Getting on the same page about issues often meant detailed debates Sunday often over a single word.

Similarly, they questioned each other about how best to state their lofty goal of eliminating homelessness and ultimately settled on an aspirational sentence describing the city in 2039 in which “homelessness in Harrisonburg is now largely a thing of the past.”

Later the afternoon, that led to more specific talks on the issue, including ensuring that affordable housing wasn’t mostly concentrated in one neighborhood, the way it is now clustered in the Northeast Neighborhood.

Reed said that she was “passionate about” developing a comprehensive housing plan, aimed at figuring out how to provide more affordable housing and address homelessness. The rest of the council quickly agreed.

The group also wants to see changes in zoning and subdivision ordinances to allow affordable housing, an increase in the number of houses for sale at a variety of price levels, and the creation of an advisory council that includes citizens to assist the Harrisonburg Redevelopment and Housing Authority.

Council members also addressed city board and commission appointments, which became a key topic of discussion at the last council meeting. The biggest problem with the process is lack of applicants, Reed said.

Jones and Baugh agreed that Environmental Performance Standards Advisory Committee, which looks at energy and environmental policies, is the only committee in the last 10 years that has attracted a large number of applicants.

The group also decided to examine and restructure the process of committing city funds to local nonprofit organizations, most of which receive funding through the Community Development Block Grant program.

“Very rarely do new applicants get on this list,” said Reed.

Jones opined that the block grant program is not “adequately advertised.” He said he was also concerned that previous councils’ lack of racial diversity may have limited their decisions about which organizations to fund.

“You haven’t had three brown council members in a dozen years? Ten years?” said Jones, adding that he, Reed, and Council member Sal Romero had all talked to local nonprofits that were unaware of the block grant opportunity.

Baugh agreed that the process needed to be reevaluated.

Because city staff have already begun soliciting applications for this year’s recipients, any changes might have to wait until after this year.

Other notable priorities for the next three years include:

The council plans to adopt a refined vision statement in their March 26 meeting. After concluding their budget considerations in April, they plan to publish and distribute their vision statement and task priorities in May.