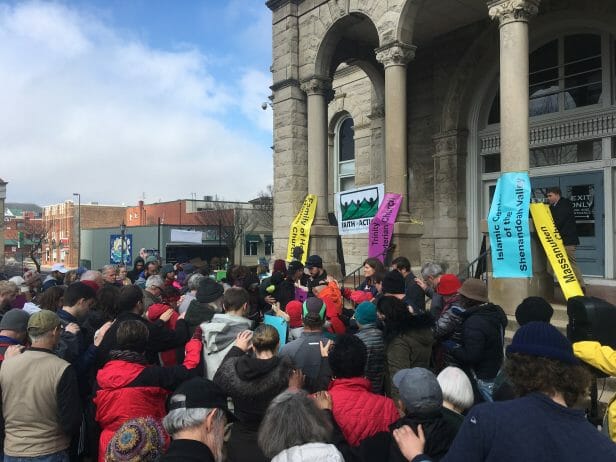 By Randi B. Hagi and Ryan Eshleman-Robles, contributors

At its quarterly meeting on Monday, the community criminal justice board (CCJB) elected Harrisonburg Councilman Chris Jones as its new chair. After the meeting, Jones told The Citizen he supports hiring a new employee as a community justice planner.

“I think it’d be great to have one person,” Jones said after the meeting, which lasted less than an hour.

He said he’s also open to the possibility of a justice planner’s responsibilities being distributed among existing staff, as long as community needs are truly addressed.

Regardless, Jones said he thinks it’s important for city and county leaders “to continue talking directly and through our administrators … to develop a plan to budget for a Community Justice Planner for [the fiscal year] 2019-20,” or an alternative that meets those needs. Last month, Rockingham County Administrator Stephen King said his budget proposal in the making included $50,000 to partially fund such a position; Harrisonburg City Manager Eric Campbell is considering the possibility but is still making decisions about his budget proposal.

The hiring of a justice planner is among the initiatives that several community groups have been urging local government to adopt. On Saturday, more than 100 people rallied on Court Square in support of hiring a justice planner and eliminating the dollar-a-day “keep fee” charged to inmates at the jail downtown. The event was organized by Faith in Action and the Northeast Neighborhood Association (NENA).

“We don’t want any elected official to think that we have given up on the campaign that we presented to them,” said NENA organizer Steven Thomas, at the rally on Saturday.

Before last October’s CCJB meeting, Thomas and others also rallied and marched in support of abolishing the keep fee and hiring a community justice planner.

At Saturday’s rally, Thomas recalled the memory of Charlotte Harris, a woman who was abducted from jail and lynched in Harrisonburg in 1878, as a particularly shocking example of the racism that has always been present in the local criminal justice system.

“Charlotte Harris was not afforded her day in court in Harrisonburg. She was not given the opportunity to argue her innocence,” Thomas said.  Remember her moans. Remember her hopes, her dreams, and her innocence by standing with us to help shape a local criminal justice system with a focus on the rehabilitation of our neighbors in need.”

During the public comment period at Monday’s CCJB meeting, pastor and counselor Harvey Yoder said he thinks it’s unjust for the “per-day keep fee to triple” when inmates are moved from the Rockingham-Harrisonburg to the Middle River Regional Jail. At the local jail, which is overseen by Rockingham County Sheriff Bryan Hutcheson, inmates are charged $1 per day. The Middle River Regional Jail, which the city and county bought into in 2015 to relieve overcrowding at the local facility, charges inmates $3 per day.

Responding to Yoder, Hutcheson said, “We run our facility, and Middle River runs their facility … I don’t follow their policies and they don’t follow mine.”

Under state law, sheriffs or jail superintendents are allowed to charge inmates a keep fee of up to $3 per day. After the meeting CCJB meeting, Jones said that while he personally supports not having a keep fee at the local jail, it’s the sheriff’s decision.

“How much more burden do we want to disperse on the taxpayers?” asked Jones, saying that local tax dollars would have to replace revenue lost by eliminating the keep fee.

As for keep fee policies at Middle River, Jones said that Harrisonburg and Rockingham County are just two of five localities represented on the jail’s authority board, suggesting that at least one of the others – Augusta County and the cities of Staunton and Waynesboro – would have to also be on board with a change to that jail’s keep fee.

At Saturday’s rally, two formerly incarcerated women, Costella Forney and Kim Kenyon, recounted their experiences in jail, focusing on keep fees’ effect on the dignity of those in jail.

“Everybody’s in there together, so some people have to sit and watch while others lay back and enjoy their incarceration,” Forney said. “They eat their noodles; they have everything that they need. It’s a mental thing, and it can cause a whole lot of unwanted distress.”

“Why are we still standing on the necks and backs of people just because they made mistakes?” she asked. “Everyone should be held accountable for their actions and their responsibilities, but in a nation as great as ours, why should people be benefiting and profiting from it?”

“I deserved to pay for what I did,” Kenyon said. “But what I didn’t deserve was to have my self-worth, my self-esteem, my overall value and feeling as human being taken away from me.”

Following the event, Thomas said an “insistence on a keep fee that amounts to less than one-percent of [the jail’s] annual budget represents a punitive approach to corrections at best.”

From a handout distributed at Monday’s CCJB meeting:

The CCJB will meet again on June 3.