This article has been updated with the correct the date of the April 27 Republican firehouse primary.

At his campaign launch event yesterday in Bridgewater, Chris Runion handed out his regular business card from Eddie Edwards Signs, where he’s president. It’s been a busy few days, he said. There hasn’t been time yet to throw together a card for the House of Delegates race he’s just scrambled into. 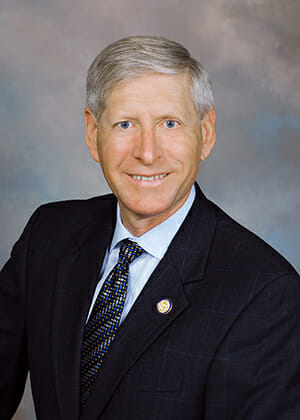 Del. Steve Landes (R-Verona) announced this week that he will not seek reelection to that seat.

That scramble was kicked off less than a week ago, when rumors began to circulate that Del. Steve Landes (R-Verona) would announce his unexpected retirement after 23 years representing the 25th District in the House of Delegates. It became official on Tuesday, when Landes said he will run for Clerk of the Court in Augusta County this fall, rather than seek reelection.

Before they knew of Landes’s plans, Republicans in the district had set Wednesday evening as the filing deadline for any candidate to contest the nomination, said Dan Cullers, unit chairman of the Rockingham County Republican Committee. The party had also agreed on a firehouse primary with one polling location in each of the three counties in the district, on Sat., April 27. The 25th District begins just south of Harrisonburg’s city limit and stretches across parts of Rockingham, Augusta and Albemarle Counties.

“We frankly assumed that it was unlikely that anyone would challenge [Landes], so we presumed that we probably would not have [that firehouse primary],” Cullers said. “But politics is always surprising.” 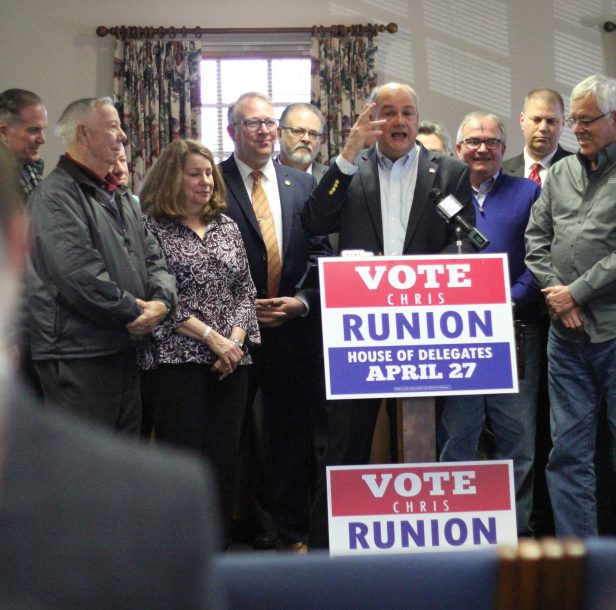 Surrounded by supporters on Wednesday in Bridgewater, Chris Runion announced his campaign for the House of Delegates

Announcing his candidacy at the Bridgewater Town Hall on Wednesday, Runion emphasized his decades of experience as a local businessman and civic involvement in organizations ranging from the Harrisonburg-Rockingham Chamber of Commerce to the United Way, the RMH Foundation and the Rotary Club. He lives just outside of Bridgewater.

Describing himself as fiscally and socially “conservative by nature,” Runion said he’s optimistic about the future.

“I truly value the opportunity to serve and represent you,” he said, surrounded at the podium by his wife, friends and supporters. “I commit to you to listen, to hear, to engage, to work hard, to work together and to have fun.”

During the recently concluded General Assembly session, Landes carried a controversial bill to begin tolling on I-81 to pay for $2.2 billion in critical upgrades identified by state transportation planners. In the end, lawmakers couldn’t agree on that or any other funding mechanism, and decided instead to continue studying the options throughout the rest of the year.

“I’m disappointed we did not get something that could work across all interest groups … but we were closer than we’ve ever been,” said Runion, who wants to let the study unfold before endorsing to a specific approach. “We need to ask questions, need to understand from the different constituencies what their concerns are…. A year’s worth of conversation is going to be beneficial in bringing people together so there can be a reasonable solution.”

Also filing to run for the Republican nomination by the Wednesday deadline were Richard Fox, who lives outside of Charlottesville, and Marshall Pattie, a professor at JMU’s College of Business and current member of the Augusta County Board of Supervisors.

Fox, 28, owns Roslyn Farm just outside of Charlottesville, which serves as both a working farm with beef cattle, horse boarding and a market garden and an Airbnb destination. He said his direct experience in agriculture, the traditional economic mainstay of the region, and the sharing economy equip him well to represent the 25th District. 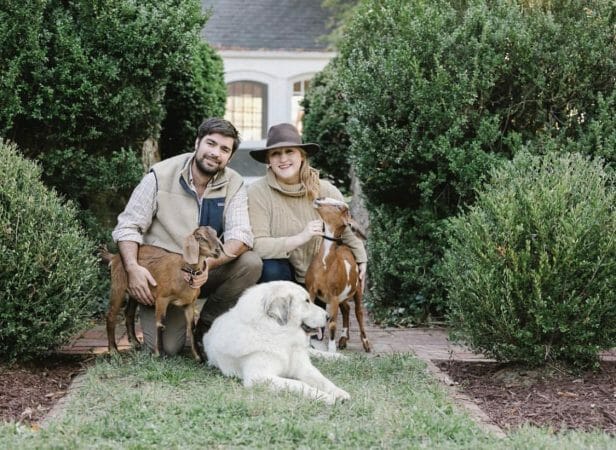 “It’s a diverse district, a unique district. I feel with my business background, with my agricultural background, I can relate to a lot of people. I definitely look forward to getting out and meeting people,” Fox said.

While he admires many of Landes’s accomplishments and ideas, Fox said they “differ a little bit” on the approach to I-81 funding. Rather than tolls or new taxes, Fox said federal tax dollars should be returned to state to pay for improvements to the interstate.

“The first step is … seeing what we can do with that,” he said.

Also among his priorities, Fox said, would be expanding the state’s school voucher system and promoting more technical and career education in high schools.

Pattie, the third candidate in the race said he would speak to The Citizen after formally announcing his campaign on Thursday afternoon.

Cullers, of the Rockingham Republican Committee, said that despite the unexpected retirement of a prominent member of the House – Landes chaired three committees and was vice-chair of the Appropriations Committee – the party has “a great deal of enthusiasm” about the coming campaign.

“We have a fairly long and strong history in this community,” Cullers said. “We have some great legislators like Tony Wilt and Mark Obenshain that have longstanding support. I think enthusiasm is pretty high.”

Two Democrats already in the race

Prior to Landes’s announcement, two candidates had already announced intentions to seek the Democratic nomination for the seat – Jennifer Kitchen, from Augusta County, and Lauren Thompson, from Albemarle County.

As in the neighboring 26th District, which includes Harrisonburg, the Democratic nominee in the 25th District will be chosen in a state-run primary on June 11.

“We were already really excited to have two relatively young women candidates already willing to undertake a hard race,” said Thea Litchfield Campbell, chair of the Rockingham County Democratic Committee. “Now with the change in the Republican candidate, that will certainly add a lot more interest to the race. We are excited to be able to talk to people and not have them just rely on name recognition, to be able to start a new conversation about what values people really hold and what constituents really want for their area.”

Campbell said she’s not aware of any other Democratic candidates who intend to join the race after Landes’s announcement, although the filing deadline isn’t until the end of the month.