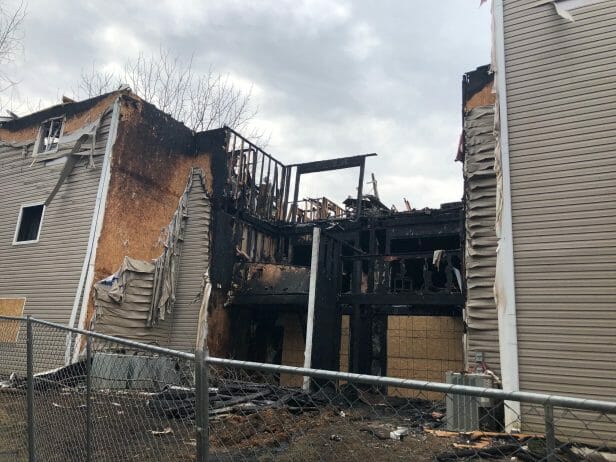 The charred remains of part of 1083 Lois Lane shows where the fire spread up from a first-floor deck along the siding and burned through the building’s third-floor apartments. (Photos by Bridget Manley)

UPDATED Saturday, March 30, 2019, with additional context and background on the 2016 mulch ordinance.

The fire displaced all 43 residents — most of whom are JMU students — who lived in the three-story building. No one was hurt, but at least one pet was killed.

Fire crews and investigation units could be spotted around the building all day Friday.

Deputy Fire Marshal Mike Armstrong told The Citizen said the five-alarm fire that called units from across the county and neighboring Augusta and Shenandoah County is being considered accidental in nature.

He also confirmed what Harrisonburg Fire Chief Ian Bennett told The Citizen Thursday evening, saying the fire started somewhere one the first floor, running up the vinyl siding on the outside and then coming in through the attic, burning through the third floor.

But the cigarette that caused the fire was not in any mulch surrounding the building, he said.

In 2016, the city of Harrisonburg instituted a mulch ordinance after responding to multiple fires as a result of mulch too close to buildings.  Harrisonburg Fire Department had responded to more than 200 fires involving mulch in the city between 2008 and 2014, according to the city’s website. The mulch ordinance would require properties to have a gap of 18 inches between the property and mulch of buildings with combustible siding.

As a result of the ordinance passed by the Harrisonburg City Council, State Sen. Mark Obenshain, R-Harrisonburg, and Del. Tony Wilt, R-Broadway, introduced legislation specifically banning city councils from creating an ordinance that included “any local fire prevention regulations a requirement that an owner of real property who has an occupancy permit issued by the City use specific landscape cover materials or retrofit existing landscape cover materials at such property.”

The bill was passed and signed by then-Gov. Terry McAullife, a Democrat. The mulch ordinance is currently on the books in Harrisonburg, however, it is not enforceable.

While this specific fire did not start in mulch surrounding the building, former city councilman Kai Degner told The Citizen that city council members were united in the decision to enact the ordinance.

“Our city council didn’t agree on much, but all five of us were on the exact same page,” said Degner, a Democrat. After the Thursday blaze, Degner visited multiple apartment buildings as well as the scene of the Southview Apartment fire and found that gravel had been placed around buildings to be in compliance with the ordinance while it was still in effect, but mulch has been placed on top of the gravel.

Meanwhile, efforts to help those displaced continued. On Friday, JMU President Jonathan Alger issued a statement praising the firefighters and the “resiliency of the students and families involved as they work toward regaining normalcy during an incredibly difficult time.”

The JMU Student Government Association is collecting clothing, bedding, toiletries and  non-perishable food items at the third floor of Madison Union and at the Festival Conference and Student Center on the east part of campus, Alger’s statement said.

And in addition to a GoFundMe campaign that raised more than $75,000 in 24 hours, he said JMU launched a Student Financial Emergencies Fund where proceeds will go toward replacing students’ educational supplies, such as textbooks and computers. 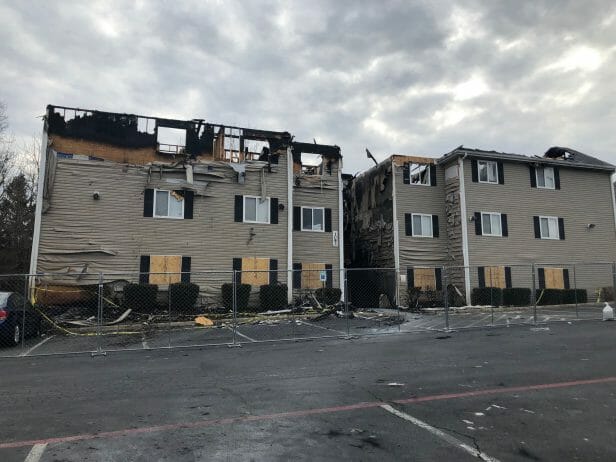