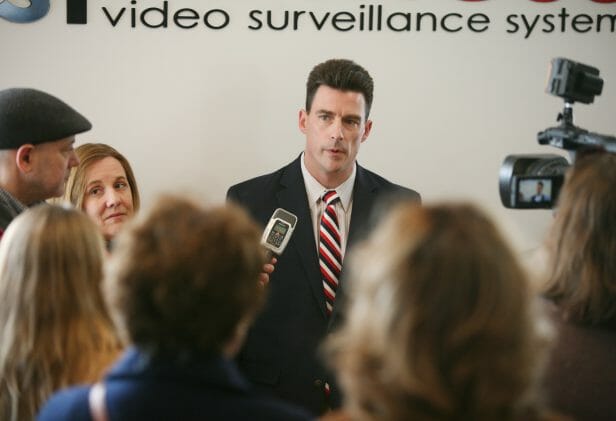 On Thursday afternoon, a fifth candidate formally announced his bid for the 25th District House of Delegates seat, vacated after surprise announcement from Del. Steve Landes (R-Verona) that he will not seek re-election in November. Marshall Pattie, an associate professor of management at James Madison University and member of the Augusta County Board of Supervisors, made his announcement at First Witness Security in Mount Sidney.

“It’s been a whirlwind. I think a couple of dominoes fell that no one expected to see,” Pattie told the crowd at his announcement. “[My wife] Megan and I had a great conversation just a few days ago and we really thought about it and prayed on it and talked to our close family and decided this was the right time to do this.”

Pattie joins local businessman Chris Runion, who announced his candidacy on Wednesday, and Albemarle County resident Richard Fox in vying for the Republican nomination for the position. 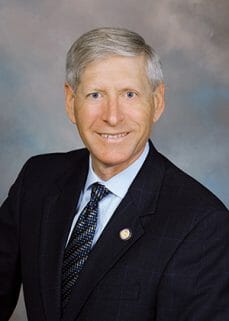 Del. Steve Landes (R-Verona) will not run for reelection this fall.

Landes, who has been a delegate for 23 years, announced Tuesday he will run for Augusta County Clerk of Court instead of defending his House of Delegates seat. The skunk-shaped 25th District includes portions of southern Rockingham, northern Augusta and western Albemarle counties. Skirting the city limits of Harrisonburg, Staunton, Waynesboro and Charlottesville, it includes the towns of Bridgewater, Mount Crawford and Grottoes and Weyers Cave. The district is not affected by the court-ordered redistricting stemming from a recent gerrymandering lawsuit

“I want to join the fight in Richmond. We have seen such extreme bills being offered that we would have never imagined five years ago,” said Pattie, citing third-trimester abortion, tax increase and gun control measures that were proposed in the General Assembly this session. “We need to fight that and I want to be that leader to fight that for the 25th District.”

Pattie, 41, has taught at JMU and lived in the Valley since 2007.  He received his Ph.D. from the University of Texas at Arlington.

“I think what I bring unique to Richmond is that I have a diverse background and education,” Pattie said. “I have the experience of legislation and being elected for eight years. But I was also an internal auditor and risk consultant, so I bring that aspect to it as well. And then what I teach is how to manage people. So I’ll be focused on … how can government be run better and how can we manage our people better and more efficiently.”

Pattie was chairman of the Augusta County Democrats from 2009-2011, an issue he expects to come up during the race. 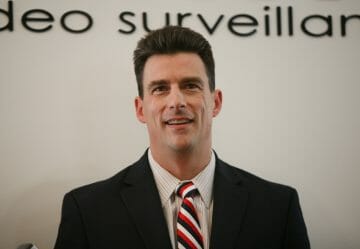 “We’re going to own it and I think it’s a great thing,” Pattie said after his announcement. “I was raised a traditional, conservative Democrat and when I got involved I just didn’t agree with those values. And so it made me a conservative. I’m going to talk about it. I’m going to talk about how Ronald Reagan did the same thing and how Donald Trump did the same thing, as well. It’s just a great base because I saw both sides. I understand both sides and I feel like I can represent the Republican creed in an effective way and also communicate with the whole population.”

As a supervisor, Pattie earned a reputation as a staunch fiscal conservative, opposing tax increases and casting the sole vote against the construction of a new courthouse in Augusta County.

“If you ask the other board members I’m reasonably predictable when it comes to my votes on money,” Pattie said to laughs from the crowd “You’ve seen me vote against property taxes and real estate taxes and machine and tool taxes and when I get to Richmond I want to make sure that we are fiscally conservative and fiscally responsible.”

He also highlighted his record of pushing for rural internet service in Augusta County and supporting the county’s agriculture industry.

“You’ve seen me fight for internet. This is something when I started I had board members laugh at me and they said ‘That’s ridiculous. They have satellite. They should be fine.’ And now look where we are,” Pattie said. “We’re winning grants. We’re applying for more grants. And that’s something I’ll advance at the state level as well. That’s something that is critical for the whole 25th’s economy, for education and for healthcare.”

During this year’s General Assembly session, Landes proposed a bill to fund improvements on Interstate 81 by using tolls – although it and a companion bill in the Senate failed. Pattie said that improving the interstate is something he plans to tackle, if elected.

“I’ve begun to meet with all of the different groups that have a say. I’ve met with trucking groups already. I’ve met with citizens that are for and against things. I’m a big advocate of transportation,” Pattie said. “If you look at the Weyers Cave exit at [mile marker] 235 I’ve put a million dollars into improving the ramps onto it. So I do have experience fighting for [I-81]. The trick will be finding that balance between all of the different people and all the different ways to pay for it. It needs to be paid for, but we need to find a solution that is equally fair to all of the different populations and solves this $2.2 billion need for improvements.”

The 25th District has been in Republican or independent hands since the 1960s, with the exception of Democrat Claude Andersen, who represented the district for one year in 1982. In his 12 elections, Landes has faced four Democratic opponents, two independent challengers and run unopposed six times. His narrowest win came in 2017, when he beat Democratic candidate Angela Lynn by 16 percentage points.

The Republican nominee for the November election will be chosen on April 27 in a “firehouse primary,” with one polling location in each county within the 25th District.

Two Democratic candidates are in the race for the Democratic nomination for the seat. Jennifer Kitchen, of Augusta County, and Lauren Thompson, of Albemarle County, had entered the race before Landes made his surprise announcement. The Democratic nominee will be chosen in a state-run primary, utilizing all general election precincts, on June 11. Primaries in Virginia are open, meaning that voters can participate in either party’s primary regardless of their affiliation.

For Pattie, who claims to have knocked on the door of every constituent in the North River District before his 2011 election win, the work will start immediately.

“We’ll be making phone calls tonight and Saturday we’ll be out there knocking on doors,” he said.