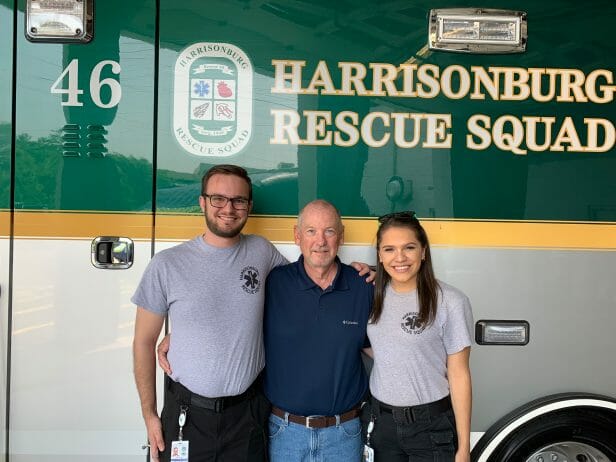 To say that Brad Schlabach is grateful to be alive would be a significant understatement. His wife, Jayne, takes it a little further.

“It’s a miracle,” she proclaims.

Brad and Jayne, who have been married for 42 years, wanted to express their personal thanks to some of those who played a role in that miracle. And so, they casually walked into the Harrisonburg Rescue Squad’s recent 70th anniversary open house.

Their appearance was met with surprise and smiles, and helped fill in a few blanks for everyone involved, including the Schlabachs.

March 28 was a busy day for emergency personnel in the Harrisonburg area. An entire building at the Southview apartment complex on Lois Lane had gone up in a five-alarm blaze around noon, requiring an all-personnel response from fire and rescue squad members.

That afternoon, Brad Schlabach, owner of Schlabach Drywall in Harrisonburg, decided to take in a round of golf with a couple of friends. He wouldn’t make it past the fourth hole, and though he does remember his score – 18 strokes through the first three holes – the rest is blurry.

“I thought I had heartburn,” explained Brad, who had had a physical just a month before, and no previous heart issues.

But when he laid down at the fourth tee box at Spotswood Country Club, his golf partners knew it was more than indigestion. Danny Rohrer, one of Brad’s playing partners, called 911 and described the situation to dispatchers. Because of the massive apartment fire, additional personnel were already on standby at the Harrisonburg Rescue Squad station on Reservoir Street.

“The duty officer arrived on the scene in four minutes,” squad chief Matt Cronin said. “The ambulance arrived a couple of minutes later.”

Because Brad was on the golf course, squad members used the duty officer’s SUV vehicle to transport Schlabach to the waiting ambulance. 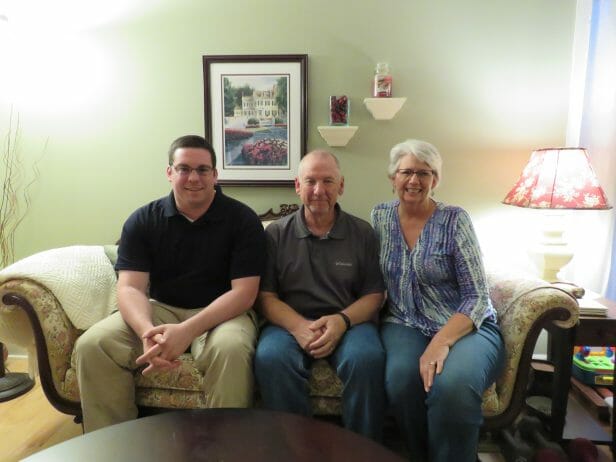 Rohrer had called Brad’s wife after he hung up from calling 911.

“I could hear sirens in the background,” Jayne Schlabach said, “and Danny confirmed that the squad was already arriving.”

Due to the fire, Jayne Schlabach, a realtor for Funkhouser Realty, was hung up in traffic on Peach Grove Avenue, trying to get to her office.

“I just headed to the hospital and waited for Brad to arrive,” she said. “When they moved me to a private waiting room, I knew it was serious.”

Serious indeed. Brad’s heart stopped twice before being resuscitated. His heart was also shocked back into rhythm multiple times both in the ambulance and at Sentara RMH Medical Center until he was stabilized.

“We were fortunate that everything worked out the way it did,” Brad said. “We thought that going to the open house to personally thank the squad members was only appropriate.”

The Schlabachs got to meet Zach Bunner and Nicole Phillips, two of the four members who were on the ambulance that responded. After they exchanged greetings, squad members also showed the Schlabachs precisely what they did to save Brad’s life.

“I have little recollection of anything,” said Brad. “It was satisfying to see exactly where I was and what all the squad members did to save my life.”

“They showed me the heart monitor and paddles that were used to shock me when I went into cardiac arrest,” he shared. “It helped me fill in some blanks.”

Brad said he was impressed with the tour, but mostly with the staff that he met.

“I figured nobody would remember me two months later,” he said, “but they all did. It was amazing.”

Chief Cronin said it is somewhat unusual for a former patient to personally thank the squad members.

“I can count on one hand the number of people who have stopped in to personally say ‘thank you,’” he said.

“In this case,” Cronin said, “I can certainly understand why. We appreciated their expressions of thanks.”

Josh Smith was the duty officer on the call. A professional firefighter/paramedic with Arlington, Virginia Fire and EMS, Smith also volunteers with Harrisonburg Rescue Squad, according to Cronin.

“Josh just happened to be on duty with us that afternoon,” Cronin said. “We were glad he was there for Brad.”

Cronin said this incident was a great example of early intervention. The call to 911 was timely. The squad was staffed and ready to respond. The right personnel were available, and communication and coordination with the hospital were excellent.

Brad echoed Cronin’s comments by good-naturedly saying, “This was a good day to play golf!”

“God had a hand in it by putting the right people in the right place at the right time,” she said. “That saved Brad’s life.”

After completing six weeks of rehabilitation, Brad Schlabach has returned to light work duty at his office, doing mostly payroll, and checking in with his 10 employees. He has also started golfing, again.

Motivated by the Schlabach’s visit to the open house, Cronin said his department would like to start an annual reunion of patients with their first responder helpers. He thinks it would be good emotionally for all involved.

The Harrisonburg Rescue Squad is an all-volunteer organization with 225 volunteer emergency medical technicians (EMTs). The department responds on average to an emergency call every hour, every day of the week, keeping the squad members busy and their EMT skills sharp – as Brad and Jayne Schlabach have verified.