Want to go behind the scenes with Valley-area first responders? There’s a podcast for that.

Inspired by one of the worst fires in this area in recent years, a veteran Harrisonburg firefighter has created a podcast aimed at clearing up some of the misconceptions about emergency services and allowing first responders tell their first-hand stories.

Paul Helmuth, who’s been a paramedic and firefighter for 29 years, started the weekly Rocktown Emergencies podcast in April.

It was the 2016 forest fire in Shenandoah National Park that ignited the idea. With multiple local, state, and federal agencies cooperatively fighting the Rocky Mount fire, Helmuth saw the need to communicate who was doing what and why.

“Over the last several years,” Helmuth explained, “I have listened to people not understand the difference between emergency agencies and knowing what services each offer. I thought it would be good to do a podcast that talks about it.”

Helmuth, 44, said that’s true of the public and even those serving in the various emergency services. EMTs, police officers and firefighters often focus on their own intensive training and responsibilities and sometimes don’t know much about the others.

“That gives them few opportunities to know what other first-responders actually do,” Helmuth said. “Do the rescue squad members know what the firefighters do and vice versa? The same is true for the police department.”

As a result, the podcast can be considered rated “E” for everyone.

Helmuth said he hopes the podcast can teach and inform people about what each profession does, how they do it, and why it is done in a particular way. He said he wants to show the personal side of emergency services.

“People also need to understand,” Helmuth continued, “that every one of these situations has a personal connection between the rescuer and the patient. The emotion is still there.” 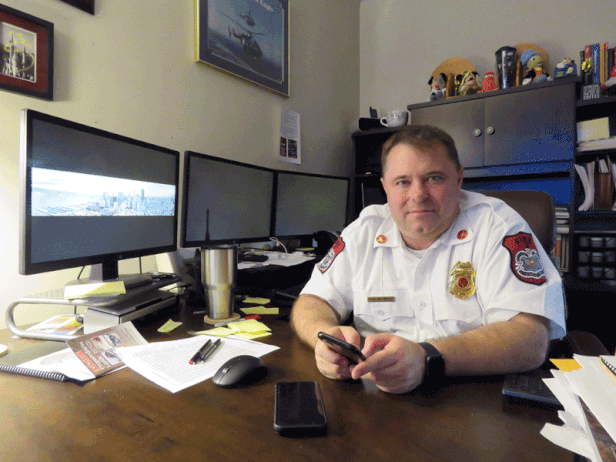 On his July 8, Episode 13 podcast, Helmuth interviewed retiring James Madison University Police Chief Lee Shifflett. In answering what the biggest challenge will be for future college law enforcement, Shifflett said, “Having people take personal responsibility for their own behavior.”  Shifflett said it’s all too easy to share something seen on social media, even though it may not be true.

Shifflett also said that students are safer on the James Madison University campus than they are at home.

“Doors lock automatically,” he said. “Police and fire both can respond within two minutes. If you don’t lock your dorm door, don’t blame someone else if there is a problem.”

Earlier this summer, the podcast launched a three-part series on firefighters and cancer, exploring the risks to which fire personnel are exposed, as well as some of the procedures local departments implemented to help prevent cancer.

And in the previous two episodes, Helmuth and Deputy Fire Chief Matt Tobia talked with two national experts on the issue: Denise Smith, a professor for health and human physiological sciences Skidmore University who specializes in first responder health, and Bryan Frieders, the deputy fire chief at the Pasadena, California, Fire Department who is president of the Firefighter Cancer Support Network.

So far the podcast, which is uploaded on Mondays, has attracted more than 1,000 listeners with an average of 50 listeners per episode, Helmuth said.

“I want to expand the podcast to reach more listeners by interviewing people from a wider geographic area,” he said.

Helmuth said the podcast requires recording equipment, software to edit it and storage for links that direct people to the program, which Helmuth pays for out of pocket.

To keep the program fresh and relative, Helmuth said he wants to do a live podcast where listeners can ask questions directly.

“I still get messages annually from a family member of a rescue we did long ago,” Helmuth explained.

The format for Rocktown Emergencies is two 15-minute parts on each podcast. Helmuth said he prepares one episode a week on his own time.

Helmuth said his interviews started with services offered in the Valley and the people who are providing these services.

“I like having people explain in their own words what they do for area residents,” Helmuth said.

Helmuth began his journey in emergency services at an early age. He joined the Harrisonburg Rescue Squad when he was 15 years old. From there, he graduated paramedic school at Northern Virginia Community College.

Helmuth launched his career in emergency services as a dispatcher in Charlottesville. His goal was to be a paramedic on a helicopter, which he successfully fulfilled. But to advance in the field, he realized that he needed a wider variety of experiences.

“I traveled around the country,” Helmuth said, “getting diverse experience as a paramedic.” He held positions in Ft. Wayne, Indiana, Kansas, and Washington, D.C., where he took his first job as a flight paramedic.

But the Harrisonburg native couldn’t shake his roots. Helmuth returned to the Shenandoah Valley in 2003 as a flight paramedic.

In 2006, Helmuth became the Rockingham County Fire Department’s emergency services officer. He joined the Harrisonburg Fire Department in 2010 as the safety and wellness officer and now serves as administrative officer for the city fire department.

“And anything else the chief asks me to do,” Helmuth added, then smiled.

Helmuth is using all of his experiences for the podcast.

“I make these contacts because of my positions locally and around the country,” he said. “Those contacts help me create the show.”

Listeners can catch Rocktown Emergencies on podcast apps, such as Stitcher, Google Play, TuneIn and Apple, or on Facebook.