(Photo courtesy of FUEGO) Participants in a FUEGO’s seminar last Saturday make a collective timeline of when their families or ancestors migrated to the U.S.

The U.S. Immigration and Customs Enforcement agency has worked its way into the consciousness of Harrisonburg in a way that few federal agencies have, especially among those concerned that immigrants’ rights are being violated. Such sentiments have even inspired a drink name at The Golden Pony: “Abolish ICE.”

“It’s nice to feel like we’re holding up that flag, as well, even though it’s more serious than a drink name would typically denote,” said Paul Somers, owner of The Golden Pony. “It at least is an opportunity to keep people’s attention on this really serious subject.”

For the last seven months, a coalition Friends United for Equity and Grassroots Organizing, or FUEGO, has led gatherings to oppose ICE – including the move of the agency’s local office to a new facility in May. FUEGO also educates undocumented immigrants about their rights.

“Even immigrants that are at risk and are detained or are at risk of being harassed by ICE, and arrested, incarcerated, separated – even they have rights,” Boris Ozuna, a FUEGO organizer, said. “They have due process, and they have dignity, and all of that needs to be respected. But it’s only when you start demanding it that you can show your power.”

Most recently, FUEGO held a training event Saturday at Asbury United Methodist Church, educating over 50 participants about ICE’s presence in the Shenandoah Valley, and working toward starting a local “rapid response network.”

The network would function like neural pathways, relaying information about ICE activity to designated groups of advocates, who could help those questioned or detained by agents.

For example, Ozuna explained, if ICE agents were seen at a nearby poultry plant, someone could call a hotline and explain the incident to a FUEGO member. That person would first verify the information, and then decide who else to contact among pre-established committees with different roles, such as documenting ICE interactions, providing legal aid and transportation, and disseminating information.

One of FUEGO’s primary complaints against local law enforcement is that the Rockingham County Sheriff’s office honors ICE “detainers.” ICE will lodge a detainer against an incarcerated individual who is about to be released, but they suspect of being in the country without authorization. Through the detainer, they ask the jail to continue to hold that person until an agent comes to take them into ICE’s custody.

“There are people that are currently at the jail that are at risk,” Ozuna said. “And if they have a right that they are eligible to be released, they should be released.”

ICE is automatically tipped off to an undocumented immigrant’s initial incarceration through the booking process at the Harrisonburg-Rockingham Regional Jail.

As Sheriff Bryan Hutcheson told The Citizen in an interview earlier this year, that relay of information happens at the press of a button – when an arrested person is being electronically booked into the jail, and doesn’t have proof of U.S. citizenship or residency. ICE then determines if they want the jail to hold that person.

“It’s not an automatic, every-time ‘we’re coming.’ They’ll look it up and determine whatever it is that they’ll determine for their criteria,” Hutcheson said. In each case locally, Hutcheson said ICE has arrived within 48 hours of lodging that detainer.

The sheriff’s office holds people in this manner for all federal agencies that request it, for instance, the Federal Bureau of Investigation, or the Drug Enforcement Administration; or even another jurisdiction within Virginia that has an outstanding warrant against someone arrested here.

Ozuna described this detainer system as “against the constitutional rights that we all have.”

According to the Immigrant Legal Resource Center, a national nonprofit organization that supports immigrant rights, 13 detainers have been struck down by state and federal circuit courts across the country between 2010 and 2018. In some of these decisions, the courts declared the detainers unconstitutional under the Fourth Amendment, which requires “probable cause” for law enforcement searches and seizures.

“As far as we know, it’s absolutely legal,” Hutcheson said. “If the form’s not legal, how do they drive away with them? They got to have some kind of paperwork, because with every inmate, there’s paperwork.”

Hutcheson said ICE uses the same paperwork other federal agencies use to obtain custody of an inmate.

The Immigrant Legal Resource Center assembled a map of the United States that codes each county with a color indicating its level of local law enforcement involvement with ICE. Rockingham County is painted orange, indicating a score of “two” on a scale of zero to seven – with zero indicating the highest level of collaboration with ICE.

Krsna Avila, a representative of the Immigrant Legal Resource Center, told The Citizen in an email that, based on documents obtained through Freedom of Information Act litigation, the Harrisonburg area “received one of the lowest ratings because of ICE’s strong connections with the county.”

“They have an Intergovernmental Service Agreement to house and profit from immigration detainees, generally allow their local officers to inquire about a person’s immigration status, and work hand-in-hand to transfer immigrants over to ICE when they are released from the local jail,” Avila said.

As far as the city’s relationship with ICE, Chief of Police Eric English’s position has been characterized by both FUEGO in a Facebook post and in a  Daily News-Record article this week. But he told The Citizen in an email that he wouldn’t “continue to repeat the departmental stance on this issue.” He said the news article “wasn’t completely accurate, so I will leave it at that.”

“We are finalizing our policy regarding this so it should be available in a few weeks,” he said.

Harrisonburg has seen grassroots opposition to ICE before.

“I think there was this … impression that the city or the county would not collaborate with ICE because years ago the county decided not to renew the 287(g) agreement,” Ozuna said. He was referring to Section 287(g) of the Immigration and Nationality Act, which authorizes local police officers to act as ICE agents.

Under 287(g), Hutcheson said, “you were actually, really sworn in federally. But that’s dead. That’s done and gone. It’s over.”

Paloma Saucedo was among a group of organizers who campaigned against 287(g) in Harrisonburg seven years ago.

“We organized against that and won,” Saucedo told The Citizen in an interview last year. The Augusta Free Press reported that the Rockingham County Board of Supervisors “declined to renew” the 287(g) agreement in October 2012. 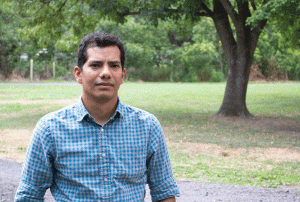 Ozuna said FUEGO has attracted firm support from locals, regardless of citizenship or residency status.

“The ones who are most at risk are seeking information, finding information. They are also in fear,” he said. “And those who have authorization to be in the country are definitely active in our planning meetings.”

From Ozuna’s perspective, much like the Biblical axiom to whom much is given, much is required, for those who aren’t personally affected by immigration policy, the time of being merely an “ally” is past, he said.

“The wellbeing of all of us is tied together,” Ozuna said.

— Andrew Jenner contributed to this article with quotes an information from his interview with Sheriff Bryan Hutcheson.