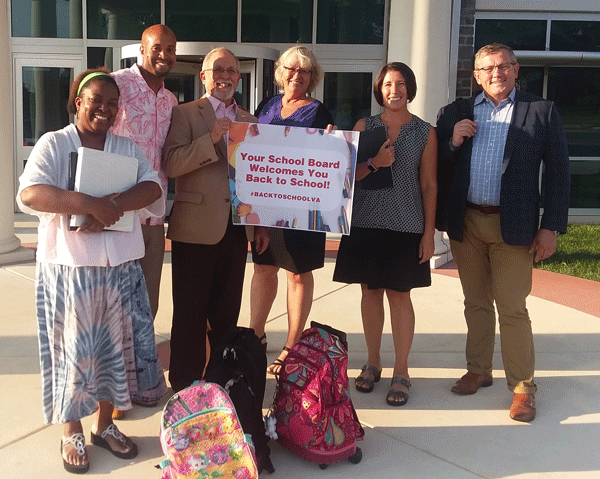 School Board members (from left) Kaylene Seigle, Obie Hill, Andy Kohen, Deb Fitzgerald, Kristen Loflin and Nick Swayne posed for a back to school photo before their meeting earlier this month. Students returned to school this week. (Photo by Randi B. Hagi)

Harrisonburg students attended their first day of classes Tuesday, but because of a change in Medicaid approvals, some of them walked into school with less support than they had last year.

April Howard, the school district’s executive director of psychological and student services, announced in a school board work session Tuesday evening that they had been informed on Friday that many city students were denied Medicaid reauthorization for therapeutic day treatment services.

Medicaid, while largely funded by the federal government, is administered by states and is aimed at covering health care costs for those who are disabled or financially struggling.

The city contracts therapeutic day treatment services from Crossroads Counseling Center. In the schools, the day treatment counselors typically have a caseload of seven or eight students who are eligible under Medicaid and who have “significant behavioral disruptions” and could be at risk of being removed from their home, Howard said.

Last year, 30 high school students were authorized for these services. This year that number was three.

And some city students who have previously been approved for six-month rounds of services were only granted two or three months this time. But Howard said Medicaid didn’t change criteria for who qualifies, which would mean some children whom Medicaid previously approved got denied this time.

The students have to wait four to six weeks before attempting to reapply.

“These are very important services for our kids,” Superintendent Michael Richards said.

Richards said he is taking three approaches to address the sudden constriction of services. One is to address state legislators. Another is to look at the budget, he said, and possibly hire more behavioral therapists. Richards will also look to community service providers to help return students to therapeutic services.

Richards turned to the school board members to ask them lobbying assistance.

“So if you are interested in working with me on that at the legislative level –” he began, before school board chair Deb Fitzgerald led a chorus of “yes!”

The school board also received suggestions to better oversee and administer Harrisonburg High School’s special education program through a voluntary audit — one that already has sparked changes in the high school.

“This is something we asked for … to improve ourselves,” Richards said.
Pat Lintner, the district’s chief academic officer, said both student performance data and anecdotal evidence led them to procure the audit from Mathews Educational Consulting, LLC.

“A lot of the findings had to do with consistency in systems,” Richards said, such as communicating student data in a timely and accurate manner.

Lintner said the report also noted that the district has “a warm, caring staff.”

Those staff members already have been implementing new procedures as a result of the audit.

Sandi Thorpe, director of special programs, said the audit was helpful “to improve our outcomes at the high school.”

Lintner said that Principal Melissa Hensley, who took the helm of Harrisonburg High School this summer, “hit the ground running.”

Hensley first tackled the communication issues – in part, by making assistant principals each responsible for cohorts of students, which includes overseeing Individualized Education Plans for students in the special education program.

Previously, just one staff member was responsible for reviewing those plans.

“It becomes overbearing for one administrator,” Hensley said.

Hensley called this an “all-hands-on-deck approach.”

“It’s very important that we have a contingency line in the budget to be able to add special education staff as needed,” Richards said.

Future improvement plans include having students play a larger role in designing their Individualized Education Plans.