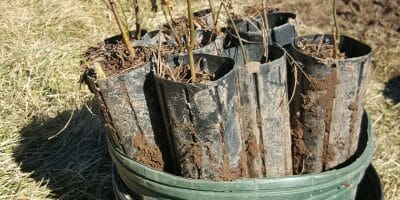 Planting for the future: The resurrection of the American chestnut

The Central Shenandoah Valley won’t be having snow for Christmas, but it might be hosting a pair of snow geese and a Ross’s goose, natives of the arctic.

Robyn Puffenbarger, vice president of programs for the Rockingham Bird Club, first spotted the mostly white birds Wednesday, hanging out at the Nazarene Church Road Wetlands west of Bridgewater, after being notified about them by bird club member Karen Shank, who spotted them on the 12th.

She and three fellow birders spotted them again Friday morning, shortly after sunrise, and added them to a list they will share with the National Audubon Society, which is holding its annual Christmas Bird Count.

Started in 1900, the Christmas Bird Count has become the longest-running community science bird project in the U.S. It takes place every year from Dec. 14 to January 5 in the U.S., Canada and many other countries in the Western hemisphere as a way of promoting conservation by counting, rather than hunting, birds.

Birders from each location in the count work in a circular area 15 miles wide during a 24-hour period. Participants conducting the count in Harrisonburg and Rockingham County are responsible for tallying birds in an area that is centered between Briery Branch and Montezuma and includes the southwest side of Harrisonburg along with Dayton, Bridgewater, Clover Hill, Rawley Springs, Mount Clinton and Hinton. The circle, which was established in the 1950s, extends into a section of northern Augusta County that includes Centerville and Mount Solon.

Puffenbarger’s husband, Bill Benish, is the official compiler for the Harrisonburg-Rockingham County count and selected Friday as the local count day.

Birders split up the areas in their circle to cover as much ground as possible. Puffenbarger and her group did not request permission to conduct the count from any private property and stuck to what they could see from public rights-of-way in a small area around the wetlands.

At the wetlands site, Puffenbarger thought she had spotted three snow geese, but George Cummins, a biologist who was participating in the count with her, noticed through binoculars that one of the three was smaller than the other two. After careful observation, Cummins, Puffenbarger and the other two birders in the group — Jaclyn Tolchin and Sami Fulton — agreed the smaller bird was a Ross’s goose.

Ross’s geese look nearly identical to snow geese but are smaller. Cummins also pointed out the shorter beak on the Ross’s goose, another difference. Snow geese and Ross’s geese frequently flock together.

How long the geese will stay in the area is anybody’s guess, but the sight of them was as pleasing as any white Christmas for Puffenbarger, a longtime birder who had never seen a snow goose or Ross’s goose in Rockingham County.

“When we see any here in the Shenandoah Valley, that’s a good bird, that’s a really good bird to have on the count,” she said.

Puffenbarger said the birds fly south for the winter and that they are a common sight this time of year east of the Blue Ridge Mountains.

While the snow geese and the Ross’s goose made for a special count, Puffenbarger was also happy to add a Merlin (a species of falcon) and eight Wilson’s snipes, a shore bird that looks a bit like a plump sandpiper, with a round body on skinny legs and a long skinny beak that it sticks into the mud at the water’s edge.

Many birds common to the area made the count as well, including more than 40 Canada geese, and a plethora of robins, starlings and blue jays.

“You’re trying to be as accurate as possible,” said Puffenbarger, one of about 20 Rockingham Bird Club members who participated Friday. “You don’t want to do estimates of counts unless it’s such a huge flock there’s no way to count it. If you had 5,000 starlings fly over, you would estimate.”

Off in a distant tree, Tolchin, a graduate biology student, spotted something. When the veteran birder looked through her binoculars, it turned out to be a red-tailed hawk.

A native of Michigan, Tolchin estimated Friday’s count was her ninth Christmas Bird Count. “It’s like a scavenger hunt that you’ll never win, in a good way. There’s always more to see, in every area you go to there are new birds to find,” she said.

Veteran birders don’t have to see birds to identify them, they just need to hear them.

“There’s the Carolina wren,” Puffenbarger said as she looked in the direction of the sound. “Can you hear that deedle, deedle, deedle, deedle? We have those all year. One of the birds we’d really like to get today on the count is a winter wren. Those only come for the winter.”

Like the snow geese and the Ross’s goose, winter wrens are native to northern climates but come south for the winter.

Tolchin, Cummins and Puffenbarger identified several birds in the air as they zipped by, either by their calls or the shapes of their bodies.

Christmas Bird Count participants don’t have to be experts, but newcomers are paired with experienced birders. Fulton, also a graduate biology student with an interest in birds, was participating in her first count.

Puffenbarger and her group called it a day after close to six hours, recording nearly 1,200 birds and 44 species.

The local count will be submitted to the state compiler and then submitted to the national office. The National Audubon website states that CBC data have been used in hundreds of analyses, peer-reviewed publications, and government reports over the decades.

Editor’s note: this article has been updated to clarify details of the first spotting of the uncommon geese species in Rockingham County.

Planting for the future: The resurrection of the American chestnut