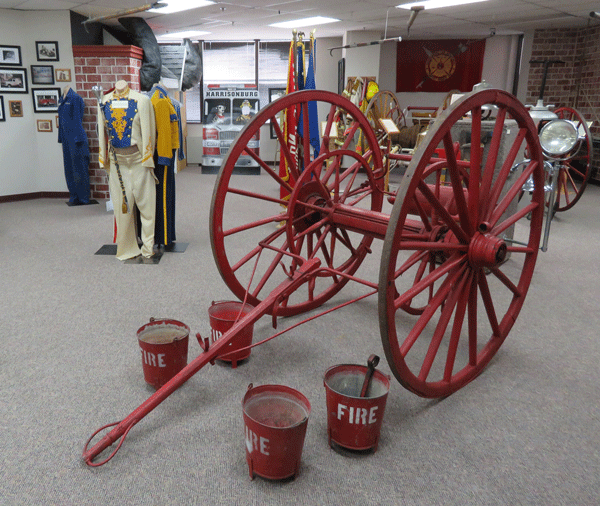 The Harrisonburg Fire Museum holds lots of displays and fire memorabilia for the public to view. (Photos by Bruce Stambaugh)

Although it was never his title or in his job description, Larry Shifflett was — and still is — a teacher with a heavy emphasis on local history. Shifflett headed the city’s fire department from 1983 to 2016, longer than any other city chief and, along the way, unintentially built a museum.

From his third-floor office in the Public Safety Building, Shifflett could see the past, the 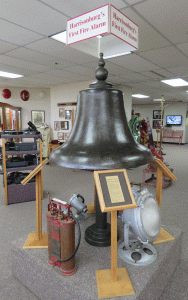 present and the future as he looked out over the city. Even before he became chief, he took that visionary approach seriously and personally.

“As the department grew and equipment changed,” Shifflett said, “I would find items in the trash that I recognized as important to the department’s history.”

So he retrieved and saved those items, sometimes storing them in his own home until the Harrisonburg Fire Museum’s creation.

“I’m not a hoarder,” Shifflett said. “I’m very organized and know where everything is. I just can’t throw anything historically significant away.”

He saved items like old fire extinguishers, alarm bells, and various lights. In doing so, Shifflett was ahead of his time preserve the past for future citizens and firefighters through this type of museum in a community Harrisonburg’s size, which isn’t common.

Today, fire department members and the public have Shifflett to thank for saving that 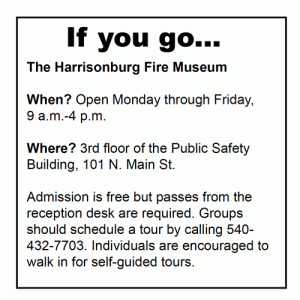 collection of history. Most items are on display in the spacious fire museum on the third floor of the Public Safety Building on North Main Street where the fire department offices are housed. Some items even hang in hallways that lead to various offices.

For the fire museum, fire department staff, and the citizens of the surrounding area, Shifflett’s collecting skills have paid dividends. If people have a question about an event in the city’s past, Shifflett is the go-to guy.

Sitting in the room from which Shifflett retired, current fire officers interrupted the interview for this article. They casually popped in to ask him questions and to seek his advice.

“Having Chief Shifflett share his knowledge is an excellent way to familiarize new fire department members with the history of the city and the system,” Tobia said. “It’s an important and unique part of the orientation.”

Tobia said Shifflett would spend the better part of a day during orientation sharing about the fire department’s earliest beginnings in the mid-19thCentury to the present. Given his knowledge and firefighting background and experience, Shifflett likely wouldn’t need any notes.

The twinkle in his eye and the slight smile on his face revealed why. He loved his job and his fire department. That love has possessed him since he joined Hose Company No. 4 in 1969 as a 15-year-old volunteer firefighter.

Shifflett’s father was a city fire officer, and when the fire whistle blew, he would often beat his father to the station on North Liberty Street by sprinting the three blocks from his house.

Shifflett said that it was nice to look out from his office to where the old firehouse stood west of the Public Safety Building. Today it’s a parking lot. The fire and police departments took over the former medical office building in 2001, he said. When he realized the department wouldn’t take up all the space on the third floor, he saw the opportunity to use part of it to exhibit the fire items he had collected, and the museum began.

“I like to think of myself as a man dedicated to preserving history,” Shifflett said. 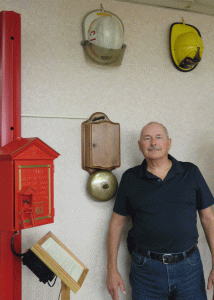 Retired Fire Chief Larry Shifflett stands beside an old fire pull box and beneath two fire helmets he had worn, which are now on display.

The expansive museum is exhibit A.

“The museum kept expanding as we needed the space,” Shifflett said. “We just kept knocking out walls to gain more room.”

As much research and time as he has put into creating and maintaining the museum, Shifflett said he has yet to determine the exact year the fire department started.

The City of Harrisonburg was incorporated in 1849. Shifflett said that the oldest city document mentioning fire department expenditures is dated 1850 when it was an all-volunteer organization. The first paid firefighters were in the 1930s, according to Shifflett.

“The system just seemed to evolve from 1926 when Fire Company Number 1 was formed,” Shifflett said. “City council had had a falling out with Hose Company Number 4 and started their own fire department.”

“Obviously,” the retired chief continued, “the rift has long been repaired.”