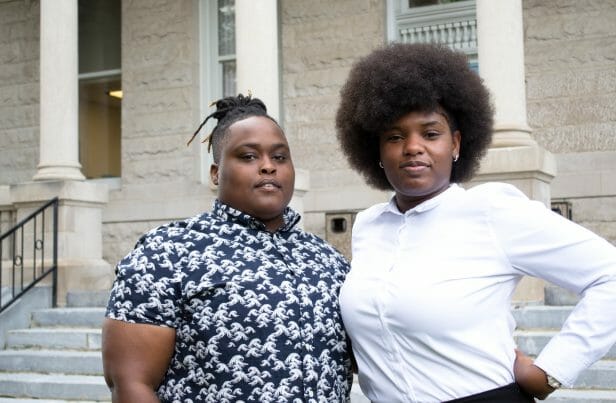 Melissa Duncan, right, and Nina Bradley outside the courthouse after Duncan was cleared of several charges she faced after police response to a noise complaint at their apartment last December ended badly. Photo by Randi. B. Hagi.

A woman facing two felonies after a controversial altercation with police last December has been cleared of all charges. Melissa Duncan, charged with two counts of assault of a police officer and a misdemeanor obstruction of justice charge, was found not guilty on Wednesday afternoon after a contentious trial on Tuesday.

The charges stemmed from an incident in December, when Harrisonburg police officers responded to a late-night noise complaint at a party hosted by Duncan and her wife, Nina Bradley, in the North 38 apartment complex. The situation escalated, ending with Bradley being tackled, Duncan intervening and being tased and, then, both of them arrested.

Bradley also goes by the name Marcus Bradley, but asked The Citizen to use “Nina” to reduce confusion.

The crux of the case was whether or not Duncan, in approaching the officers while they arrested Bradley, was pulling on them to release Bradley from the excessive force of a chokehold. The officers claimed they did not use a chokehold, and that Duncan was instead punching and kicking them.

Duncan waived her right to a trial by jury, and was found innocent of the charges by Judge Bruce Albertson.

Four videos were entered as evidence, and referred to by both the prosecution and the defense: three from the responding officers’ body cameras, and a cell phone video taken by a partygoer. During five hours of proceedings on Tuesday, testimony was given by the three responding officers, Duncan, and another partygoer, Jayla Williams.

When announcing his ruling on Wednesday, Albertson said he “sat here for three hours” after the trial, watching and re-watching the videos. The apartment was dark, and the scene chaotic – making it difficult to clearly see many parts of the videos.

“I’m pretty flabbergasted with the case,” Albertson said, as he displayed on a projector a still image from one of the body cams. “These are pictures … which show that Officer [Dwayne] Jones has his arm wrapped around Ms. Bradley’s neck.”

Albertson said that it was possible Jones’s hand had just slipped into that position at that moment of the film, but he still found that Duncan had “a reasonable fear” for Bradley’s safety.

He also reprimanded both Duncan and Bradley for their behavior.

“They were aggressive, they were rude, they were disrespectful without cause” to the officers, Albertson said. He added that many who watch the police body camera videos, two of which were released on YouTube (links here and here) following initial public outcry after the incident, may feel that Duncan and Bradley got their just desserts.

“It looked to me that you wanted a fight,” he told Duncan.

However, “deadly force like a chokehold is not reasonable in such a circumstance,” he said.

After the ruling, Duncan walked out of the courthouse, free.

“Justice was on my side this time,” she said, once outside.

Duncan acknowledged that she and Bradley may have said things they shouldn’t have, but believes the officers’ response was another example of police using excessive force on black people.

Duncan and Bradley are black. The three officers are white.

“Often times there is too much focus on what defendants may have said as justification” for police brutality, said Duncan, who thinks the officers would have responded differently if she were “a Caucasian female.”

During the trial, Duncan testified that part of her reaction to the officers stemmed from childhood trauma. Duncan, who broke down in tears several times during her testimony, said she had been in foster care for part of her childhood, and one of her foster parents was in the police force. Duncan said this person physically abused her for six months before she was removed from that home.

Chanda McGuffin, co-founder of the Waynesboro-based advocacy organization RISE, which facilitated a discussion on race in Harrisonburg earlier this year, attended Tuesday’s trial to support Duncan.

“I believe that when Melissa gave her testimony … and she told that story about her being in that foster home, and what she had endured, she made herself human to the judge right in that moment,” Chanda McGuffin said. “In the black community, that’s one of the biggest things that we fight – is to get and teach people of another race, especially the white community, to see us as human.”

Bradley will face trial on a misdemeanor charge of obstruction of justice next month.

During trial, diverging accounts of the night’s events

The evening’s trouble started out as a noise violation. Bradley and Duncan were given an initial warning to lower the volume by Officer Steven Kramer. They complied, and he left the premises. About an hour later, Kramer returned with Officer Jones, after receiving another call that the party was again too loud.

The officers informed Bradley and Duncan that they were writing Bradley a summons, because the party had continued to be loud after a first warning.

“They became very irate,” Jones testified, “cussing at us, throwing racial slurs at us.” As can be seen in the police body camera videos, both Bradley and Duncan interacted with the police, but Bradley did most of the talking. After arguing for several minutes, Bradley eventually signed the summons.

“We gave them a lawful order to disperse the party,” Jones said.

Partygoers, however, said they were staying, and Bradley and Duncan went inside.

The two officers waited for backup. After Officer Jacob Castellano arrived, Bradley and Duncan stepped outside again. Kramer told Bradley she was under arrest. Bradley ran back inside the apartment, followed by the three officers and Duncan.

Here’s where the two accounts of the evening diverge most severely. After Jones, in his words, “slip tackled” Bradley to the ground and tried to handcuff her, Duncan said she saw him place Bradley in a chokehold.

“He had his arm around her throat,” Duncan testified. “I heard her. She said, ‘I can’t breathe.’” Duncan said she repeated this to the officers, but Jones maintained the hold on Bradley. Duncan said she then tried to push and pull the officers off of Bradley, not to stop the arrest, but out of fear they would suffocate her.

“I felt that it was my job to protect her, because she was being brutalized … I couldn’t sit there and watch her potentially die.”

The officers testified that Bradley was not held in a chokehold.

Duncan said she did not punch or kick the officers. The officers testified that she did. 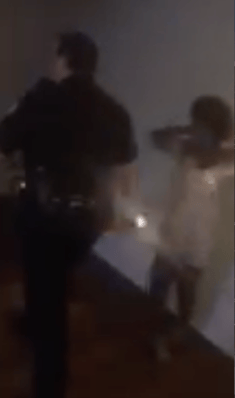 A still image from a video taken by a party goer shows Duncan just before she was tased.

Duncan ended up on the ground. The officers said that she kicked them; Duncan testified that she was flailing, trying to get back up. Another partygoer helped her up.

Jones then tased Duncan. Kramer testified that “the taser did not work,” and he thought he waited 10 to 15 seconds before firing his own taser on Duncan. Each tasing lasts five seconds.

In a short video taken on the cell phone of a partygoer, which the prosecution entered into evidence, defense attorney Jessica Sherman Stoltz pointed out the two “pops” of the tasers going off – three seconds apart, meaning that if the first one did discharge successfully, then Duncan would have briefly had two tasers shocking her simultaneously.

Duncan was then handcuffed and taken to Sentara Rockingham Memorial Hospital.

None of the witnesses reported any serious injury from this incident.

For some, the case held echoes of the circumstances of Eric Garner’s death in 2014 – Garner, an unarmed black man, suffocated as a New York City police officer held him in a chokehold.