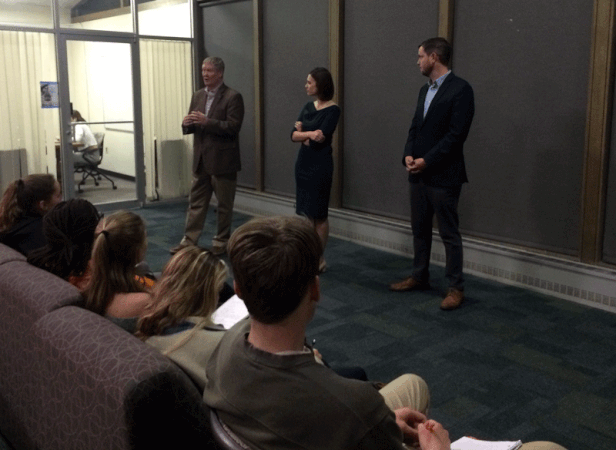 In a sneak peek of the 26th District state delegate race, Republican incumbent Tony Wilt and the two Democrats seeking to challenge Wilt all road-tested their distinct approaches on Thursday, even if the trio largely avoided debating each other over the issues.

Wilt and Democrats Brent Finnegan and Cathy Copeland made their opening cases during three “Traveling Town Hall” stops at JMU residences — the Grace Street Apartments and at two residence halls on campus. The Traveling Town Hall, put on by Dukes Vote and the Office of Residence Life, gave dozens of students at each of the three stops a chance to ask a few questions of the candidates after hearing them make 10-12 minute pitches.

Wilt touted his community roots and the advantages of incumbency, such as legislation he’s worked on. Copeland focused on her tracking of bills in recent sessions, while highlighting her support of women and women’s issues. And Finnegan framed his policy goals in the context of his own experiences and those of voters he talked with during his 2017 run for the office.

Finnegan, a member of the Harrisonburg Planning Commission who works for JMU’s Institute for Innovation in Health and Human Services, and Copeland — who teaches in JMU’s Writing, Rhetoric and Technical Communications Department — face each other in the June 11 Democratic primary in a rematch of their 2017 primary, which Finnegan won.

The two Democrats, though, revealed few policy differences Thursday during their second stop at Huffman Hall.

In broad strokes, both touched on economic issues, such as the widening income gap.

Finnegan said people frequently bring up money worries when he’s been campaigning door-to-door, going back to the race two years ago.

“I heard more than anything, people who had anxiety — economic anxiety — about (whether) they’ll be able to stay in their apartment … because their rent’s going up and their paycheck isn’t,” Finnegan said. He added that he understood what it was like to endure an “economic tailspin” after accruing debt in the wake of being laid off from a television production job in 2007.

Copeland twice mentioned her goal of eliminating student debt, adding that she expects to finally pay off her college debt this summer.

Both Democrats mentioned their frustration that public school funding still hasn’t rebounded to the levels from before the 2008 recession.

At one point, Copeland ticked through many her top 25 priorities she said she’s been drawing up that includes several education issues but also spanned a range from the environment to infrastructure and health care.

“I want to reduce the school counselor-to-student ratios … I want to champion medical marijuana and physical therapy as avenues to address opioid addiction and how they deal with pain. I want to reduce carbon emissions,” she said.

The two also touched on inclusion, albeit in slightly different ways.

Finnegan said he wants to take on environmental issues to stem climate change and pass criminal justice reforms. And to do, he said, means finding common ground, such as starting with the “values of this district,” which is home to the signs that say “No matter where you are from, we’re glad you’re our neighbor” in English, Spanish and Arabic.

“If we can get everyone together in a room and we talk about it and we figure out a plan, that’s the path forward. And that’s the way that I operate,” he said.

Copeland expressed frustration that the General Assembly failed to ratify the Equal Rights Amendment during this session or a broader family leave policy. And she touted her support for women, including creating a group called “Women of the 26th” to help encourage women in the Harrisonburg-Rockingham County area to take leadership roles.

“When women lead, science shows that they bring more collaboration and problem solving to the mix, that they’re more ethical and take initiative to get results,” she said.

Waiting for his challenger

Wilt, who is running for his fifth full term, appears unlikely to draw Republican opposition before next Thursday’s filing deadline and must await the results of the Democratic primary to learn who he’ll face in the November election. So on Thursday, he largely kept his pitch to the students focused on what his role as delegate entails, including the learning curve of “getting into the weeds” on issues.

“That’s the reason I’m against term limits. We are term limits,” he said pointing out to the 30 students who crowded into the TV lounge at Huffman Hall to listen to the candidates. “Our job should be looking at the job the one who’s elected is doing.”

Wilt touted the nearly $1 billion in tax cuts Virginians will receive as it filters down from the federal tax cut President Donald Trump and the Republican-controlled Congress passed in 2017. And Wilt criticized some Democrats in the General Assembly for wanting to spend that money on programs instead of passing it through to taxpayers even after Democrats complained about Congress passing the cuts in the first place.

On higher education, Wilt told the students that he passed a measure in 2018 to allow their contact information to remain private by default and then came back this session to correct an unintended effect of it the new law, which blocked professors from being able to email groups of students.

Wilt acknowledged that other efforts are slow going in Richmond. For instance, he said he’s still holding out hope for a deal to fund $2 billion in improvements to I-81 — which the General Assembly punted on this session and instead will “study” for another year.

Skirmishes but no debate

At Huffman Hall, the closest the candidates came to openly disagreeing came in in the brief Q&A portion at the end.

For instance, one student asked them whether they supported the bill during this year’s General Assembly session that would change late-term abortion requirements that ended up making national headlines when its sponsor, Democratic Delegate Kathy Tran of Fairfax, responded to a question during a committee hearing that the bill would allow for an abortion while a woman is in labor. Tran later sought to correct the record, noting that such a situation would be infanticide, which is illegal.

“Abortion is the law of the land, but what this bill did was took this to the next level,” Wilt said. Specifically, he said he took issue with the legislation changing the conditions for a late-term abortion so that only one doctor would need to sign-off on it, instead of three doctors, which is required now.

“I don’t think that Kathy Tran’s bill was a problem, but how she phrased it certainly was,” Copeland said.

But overall, she said while she supports women having their right to choose, the goal should be fewer abortions.

Finnegan addressed the question more generally, saying abortion is a medical decision that can’t be legislated into a one-size-fits-all situation.

“I don’t think the government should be getting between couples and their doctor to try to make these choices,” Finnegan said.

For the students, some of whom will be voting in their first state legislative elections this year, it was an opportunity to gauge the candidates for both style and substance.

Emily Baker, a sophomore political science major and at large senator in the Student Government Association, said she was most impressed with Copeland’s “constant dedication” to read each piece of legislation filed in Richmond and analyze them.

“She seemed to know the most about the issues,” Baker said.

Eliza Futa and Isabella Moshier, both first-year students majoring in international relations, said they wanted to like Copeland because they want to see more women in political leadership roles. But both said she lacked specifics.

Moshier, who is registered to vote in Harrisonburg and plans to vote in the June Democratic primary, said she was impressed with Finnegan.

“He had his facts straight. And he was relatable,” she said.