The deal is off between the Harrisonburg City Public Schools and solar company Secure Futures, LLC to build the largest solar array for a Virginia public school system.

The school system’s leaders and the solar company couldn’t agree on the terms and ultimately broke off negotiations last month, according to documents The Citizen received through a request under the Virginia Freedom of Information Act.

The school board and the Staunton-based solar energy developer had been in talks for six months over the financial and logistical details of constructing and operating solar arrays at five schools: Harrisonburg High School, Smithland Elementary/Skyline Middle School, Bluestone Elementary, Keister Elementary and Stone Spring Elementary. Under the proposal’s initial concept, Secure Futures would have built, maintained and retained ownership of the solar panels, allowing the school district to reap a portion of the savings from its electricity bill because of the power the arrays would generate.

By last month, though, the two sides hit an impasse, and school district officials notified Secure Futures in a June 7 letter that they were ending the negotiations.

A mutual non-disclosure agreement signed March 1 by Secure Futures president and CEO Tony Smith and school board chair Deb Fitzgerald, has prevented them from talking publicly in any detail about what happened. 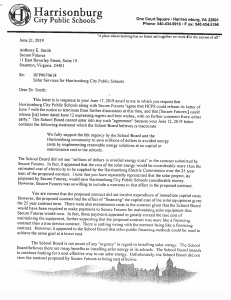 But the documents The Citizen requested offer a window into key friction points, including the school board’s concern that the proposed energy savings from the solar arrays wouldn’t be guaranteed.

“The School Board did not see ‘millions of dollars in avoided’ energy costs in the contract submitted by Secure Futures,” according to a June 21 letter signed by all six school board members. “In fact, it appeared that the cost of the solar energy would be considerably more than the estimated cost of electricity to be supplied by the Harrisonburg Electric Commission over the 25 year term of the proposed contract.” (Download the June 21 School Board letter.)

And, the letter continued, Secure Futures was “unwilling to include a warranty” to ensure those savings.

As a result, the deal “did not appear to be in the best interest of the School Board and the City of Harrisonburg,” the letter concluded.

Tony Smith, Secure Futures’ president and CEO, told The Citizen in an interview Monday that he had concerns with several points in the letter, including its description of the lack of estimated savings and the call for a guarantee. He said such a formal promise is impractical.

“In order to guarantee the savings, you’d have to know what the future of electricity prices are,” Smith said. “In addition, you’d have to have perfect foreknowledge of the behavior of the buildings and the occupants.” That would involve being able to anticipate the energy use — or increased efficiency — of technology and whether students and staff would use power differently over the next quarter century, he said.

Instead, the company was willing to provide a warranty for the solar panels’ operation and would be responsible for the cost of maintaining them.

Smith also provided The Citizen with a timeline of events, including discussions he had with Harrisonburg Electric Commission general manager Brian O’Dell. The document outlined the estimated savings for the school district over 25 years to be at least $734,000 and potentially as much as $2.8 million for a 2.7 megawatt project. (Download the Secure Futures timeline.)

A project of that size would have dwarfed the electrical output of all of Harrisonburg’s other solar installations combined. Residents and other organizations, such as EMU, have a combined power generation of 1 megawatt, according to the latest Solar Census figures as of May 2. That’s particularly notable considering Harrisonburg already far outpaces the 15 other cities in Virginia with municipal electric utilities in terms of total solar generation capacity, as O’Dell said at last month’s Harrisonburg Electric Commission meeting.

Smith said the net benefit of the schools project would go beyond energy because of the educational component of having the panels at the schools and Secure Futures’ commitment to funding a part-time sustainability coordinator for the schools.

He still holds out hope that his company and the school district can ultimately work something out.

“I fervently hope we can achieve reconciliation on these concerns and have open dialogue at their earliest convenience,” Smith said.

Fitzgerald told The Citizen after the board’s June 18 meeting that the board “continues to explore other options … about solar.”

But she has since declined to comment further upon the advice of the board’s lawyer, Kevin Rose, because of the nondisclosure agreement.

It seemed, at first, to be a comfortable match.

Secure Futures specializes in solar installations, as well as providing educational information for teachers to present to students about renewable energy. And the company has worked with other key organizations in Harrisonburg, including Eastern Mennonite University, on solar developments.

Both school board members and Secure Futures officials have said they viewed the project as a potential teaching tool as well as a cost-saver.

“It could help connect the dots between rooftop solar and the classroom – essentially to bring solar to the classroom,” Smith said on Monday. For instance, students and teachers would have access to data generated by the solar panels and accompanying weather stations that could help with hands-on learning opportunities, he said.

And when the school board announced the project in December, board members expressed excitement that the school wouldn’t have to pay anything for the panels.

The plan was for Secure Futures to build the solar arrays at five schools at no cost to the school district. Together, the project was initially intended to generate 3.8 megawatts, with the company retaining ownership of the panels. Under the initial plan outlined at the Dec. 4 school board meeting, the district would buy solar-generated electricity from Secure Futures at a cheaper price, allowing it to save up to 65 percent of its energy costs at the five schools where the arrays were be built.

Secure Futures estimated that the district would save $4.5 million on energy costs over 25 years, as the company outlined in the Dec. 4 meeting.

“When I found out that there was no initial cost for us, [and] that the cost of service was less than we’re currently paying for electricity, that was a win for me, coming from a more conservative perspective,” board member Kaylene Seigle said at the time.

But negotiations about how to actually achieve that, especially spelled out in a legal contract, got complicated.

By April, the proposed project had been scaled back to 2.76 megawatts. At that time, Board Chair Deb Fitzgerald described the negotiations — which were being handled between the board’s attorney Kevin Rose and Secure Futures  —  as being “thorny.”

The discussions also looped in the Harrisonburg Electric Commission, the municipally owned utility, because it would be affected by the deal. The commission currently credits solar panel owners for the energy their arrays pump back onto the grid. That means a big customer, like the schools, suddenly starting to generate its own power instead of buying it from HEC could affect the utility’s bottom line.

In this case, though, the impact would be softened by the electric commission having to buy less power from its major supplier: Dominion Energy. In all, the net annual loss to HEC was estimated at $157,000, according to figures provided by Secure Futures and confirmed by O’Dell at the HEC’s April meeting.

Ultimately, though, the rough edges couldn’t be smoothed out.

Craig Mackail, assistant superintendent of operations and school safety, sent a three-sentence letter to Smith at Secure Futures on June 7 to say the board had directed its attorneys to “discontinue editing and/or revising the contract,” effectively ending the negotiations.

“Although an agreement could not be reached, the School Board does appreciate the time and effort Secure Futures has invested in this initiative,” Mackail wrote. (Download the June 7 School Board letter.)

Smith, Secure Futures’ CEO, responded in a June 12 letter that he was disappointed that “despite heroic good faith efforts by HCPS staff, the School Board and our team to make this project work, that we were unable to arrive at bankable contract terms” and expressing hope that the two parties could “revisit” the proposition. (Download the June 12 Secure Futures letter.)

“We fully support the felt urgency by the School Board and the Harrisonburg community to save millions of dollars in avoided energy costs by implementing renewable energy solutions at no capital or maintenance cost to the schools,” Smith wrote.

The school board’s follow-up — the June 21 letter signed by the six board members — took issue with that last sentence Smith wrote, saying the board “did not see” millions of dollars in savings or include a warranty to guarantee them.

“There were also maintenance costs in the contract given that the School Board would have been required to make payments to Secure Futures for maintaining solar equipment that Secure Futures would own,” the board’s letter said. “In fact, those payments appeared to greatly exceed the true cost of maintaining the equipment, further supporting that the proposed contract was more like a financing contract than a true service contract.”

There’s nothing wrong with that, the letter continued, but “it appeared to the School Board that other public financing methods could be used to achieve the same goal at a lower cost.”

The letter did not say what those other methods would be.

And the letter said the board “is not aware of any ‘urgency’ in regard to installing solar energy” — directly responding to Smith’s language in his earlier response.

Smith said in the interview with The Citizen that all prospective solar customers are under the same level of urgency because the federal investment tax credit offered for residential and commercial solar installations will decrease starting Jan. 1, 2020. The tax break will drop from 30 percent to 26 percent.

“That has a big impact,” Smith said. “There is a land-rush as we speak in our country to complete solar projects before this (tax credit) down-shift occurs. For that reason, there has already risen a labor and material shortage for solar projects.”

Smith said the end of the negotiations was “disappointing.” But he said that hasn’t dampened his enthusiasm for seeing Harrisonburg schools create a landmark solar project. It’s just that the path isn’t as clear now.

“We enjoyed nothing less than an extremely positive relationship with the members of the school board,” he said. “We’re also the home team, so to speak, so we feel that there is a strong commitment on our part to do this for the city of Harrisonburg.”