On Nov. 5, Harrisonburg voters will have a say in choosing their next Delegate and State Senator. The local Sheriff and Commonwealth’s Attorney will also be up for re-election, although neither of these Constitutional Officers will face a challenger on the ballot.

For even more about the candidates’ backgrounds and positions on key issues, check out The Citizen’s coverage of those contests: 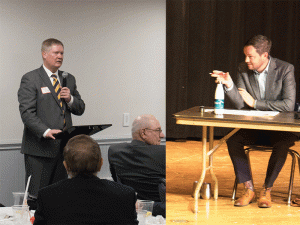 Familiar opponents Wilt and Finnegan gear up for the fall’s 26th District race in a different political environment.  (June 20)

Wilt, Copeland and Finnegan give JMU students a preview of their 26th District campaigns (March 22)

In the wake of Tuesday’s primary, Democrats’ first order of business is coming back together (June 14)

Democratic candidates ‘nerd out’ in final pitches to voters, as their supporters’ resolve hardens (June 5)

With 3 weeks to the primary, Finnegan and Copeland ramp up their (different) approaches to reach Democratic voters (May 21)

At Democratic forum, candidates largely in agreement on the issues – and critiques of Republican policies (May 10)

A farmer, a businessman and a county supervisor walk into a debate hall… (Debate coverage, April 17)

While debate over local criminal justice continues, voters won’t have much say on top law enforcement jobs this fall (June 17)