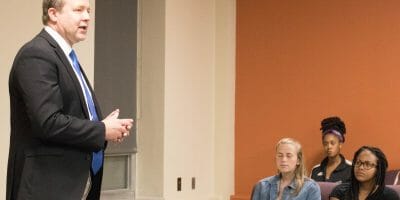 Facing more than 40 JMU students in Eagle Hall’s common room Wednesday evening, Republican U.S. Senate candidate Corey Stewart offered a brief pitch, then opened it up for students to throw it right back at him.

“No softballs,” he said. 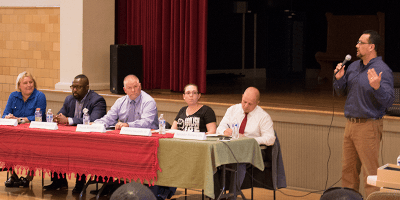 Saturday’s city council immigrant forum revealed a philosophical gap between the five candidates – not necessarily over political ideology – but more broadly in how they view the relationship between government and citizens. The candidates, who are vying for two seats in the Nov. 6 election,  also differed over the council’s ability to actually affect certain issues, including access to health care and federal immigration policy. 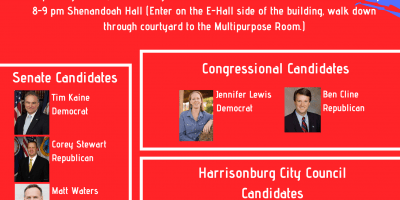 Instead of only hoping JMU students show up to vote in the Nov. 6 Election, many of the candidates in the biggest races affecting Harrisonburg will bring their campaigns to JMU students on Wednesday, Oct. 10.

Candidates or representatives from Virginia’s U.S. Senate race, the open 6th Congressional District contest and those running for the two spots on Harrisonburg city council will embark on an old fashion barnstorming tour by bus – bus-storming? – to three JMU residence hall areas. It’s being billed as a Traveling Town Hall complete with free pizza and the candidates’ best talking points. Each candidate will have between five and seven minutes to address the audience of first-time or relatively new voters. 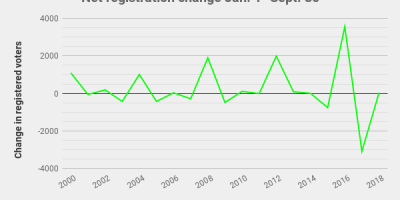 Wave or ripple? Voter registration numbers in Harrisonburg on an ordinary path to the mid-terms.

By Jeremiah Knupp, contributor With the upcoming midterm elections dominating the national news cycle, voter registration numbers around the country are soaring. Over 800,000 people signed up on National Voter Registration Day on Sept. 25, according to Nonprofit VOTE, who sponsored the event. State election officials have said that registrations are up this year over …