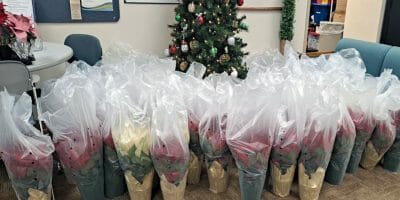 Greenhouses deliver holiday cheer to those in hospital

For the first time since the 2019 year-end roundup, the COVID-19 pandemic wasn’t driving local news, at least in the stories our readers were clicking on the most. In fact, of the top 10 most-read stories on The Citizen in 2022, the word “COVID” appears only in passing, like a black cloud receding into the distance.

Instead, the stories people seemed most interested in focused on a lawsuit involving the Harrisonburg City Public Schools, as well as stories about an embattled local veterinarian accused of poor care of pets.

There were other major area stories, to be sure. Most notably, the community reeled in the wake of the murder of two Bridgewater College police officers on Feb. 1. The November election resulted in a mix of new and returning faces to the city council and school board. And some shuffling among city leadership made news throughout the year with Ande Banks officially becoming the new city manager in October, council member George Hirschmann suddenly resigning for health reasons in May, and school board chair Nick Swayne departing to be a college president in Idaho this summer, which was one of the many stories Citizen publisher Bridget Manley broke in 2022.

But in terms of stories that got the most buzz and clicks this year, here’s the Top 10:

A group of six parents and teachers — with help from an Arizona-based conservative group — filed a lawsuit against the city schools over the summer, alleging that teachers were being instructed to keep parents in the dark if a child asked to go by a different name or pronouns. The school district said the approach did include involving parents. (See article No. 8 on this list for the original article about the suit.) Bridget Manley covered all sides of the issue leading up to the hearing in Rockingham County Circuit Court.

The city council members started off their April 12 meeting with a little economic development news. Harrisonburg would welcome Lauf Cycling, an Iceland-based bike maker that will employ about a dozen people over the next several years.

8. ‘Pushing parents out’ or ‘misinformation’? Lawsuit against schools comes after months of back-and-forth (June 8)

Early interest in the elections focused on the will-he-or-won’t-he question surrounding Vice Mayor Sal Romero, who was up for re-election, as Bridget Manley’s article pointed out. Romero ultimately decided not to run for a second term. (He explained what’s next for him and reflected on his four eventful years on the council in this in-depth piece contributor Rachel Petterson wrote earlier this week.)

6. ‘Their actions are hurting us’: how HHS students have turned up their advocacy against critics (Dec. 5)

Student leaders of the Gay-Straight Alliance at Harrisonburg High School took on increasingly public roles in speaking up this fall in the wake of some community members’ comments at school board meetings and the lawsuit over the school district’s approach to working with transgender students.

While it might not look its age, the Bar-B-Q Ranch just north of Harrisonburg on Route 11 turned three-quarters of a century old this year. Contributor Gracie Brogowski interviewed the owner and patrons about the restaurant’s longevity, while contributor Kevin Gorman put together a video piece about one of the restaurant’s most popular event: the “Cruise-In,” which is part dinner, part car show.

Bridget Manley was the first to report on the judge’s rule in the suit against the school board.

The Citizen first reported in 2020 about controversies and complaints regarding the owner of the Harrisonburg Veterinary Emergency Clinic. In March, the Virginia Board of Veterinary Medicine suspended Ayman Salem’s license, pending a hearing. And, as senior contributor Eric Gorton, reported in this article, it came at a time when demand for veterinary services was high — and availability of veterinarians wasn’t.

2. Curious about those new poles popping up? They’re key components of a new technology coming to town (July 29)

Yes, we were curious about the metal utility poles with the cylindric doohickies on top. Clearly, readers were, too. And Bridget Manley solved the mystery.

For two days in July, the Board of Veterinary Medicine in Richmond heard from a series of pet owners and other veterinarians about the level of care provided by Dr. Ayman Salem, owner of emergency veterinary clinics in Harrisonburg and Winchester. Contributor Zia Faqiri chronicled in detail the emotional sagas of botched surgeries and misdiagnoses leading up to the board’s decision to prevent Salem from practicing for the foreseeable future.

Greenhouses deliver holiday cheer to those in hospital